The Artisan Soppressata it’s a real treat for the eyes and the palate.

Artisan Soppressata San Marco, also known as schiacciata, due to its compact shape that enhances its taste.

The soppressata, unlike the sausage, is made with the most noble parts of the pig, in particular with the ham, which makes it leaner than the cuts used for the sausage.

The process is very laborious as, once the meat is stuffed, the soppressata is placed on shelves and pressed for 48 hours.

It is then hung in the drying cells where it rests for about 60 days.

San Marco handcrafted sopressata from Cilento has a rather long seasoning time so that maximum exaltation of taste can be guaranteed. 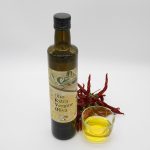